First built in 2017 by Ingenhoven Architects, Freiburg Town Hall is the first public net-surplus-energy building in the world. It is located in Freiburg im Breisgau, providing workplaces for 840 employees of the City Administration. The energy demand of this building is as low as 55-kilowatt hours per square meter per year which is only 40 percent of the primary energy demand of modern office buildings. 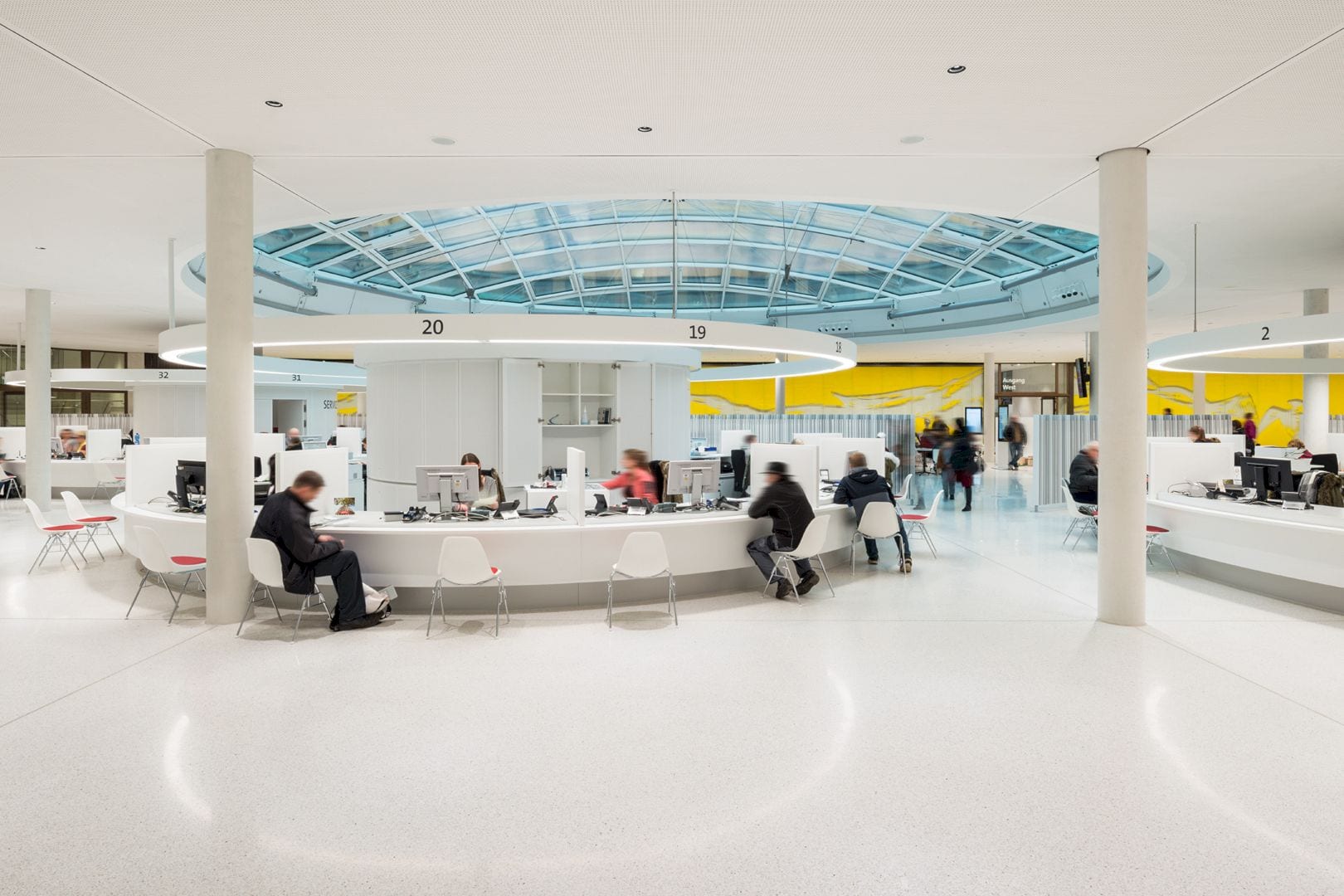 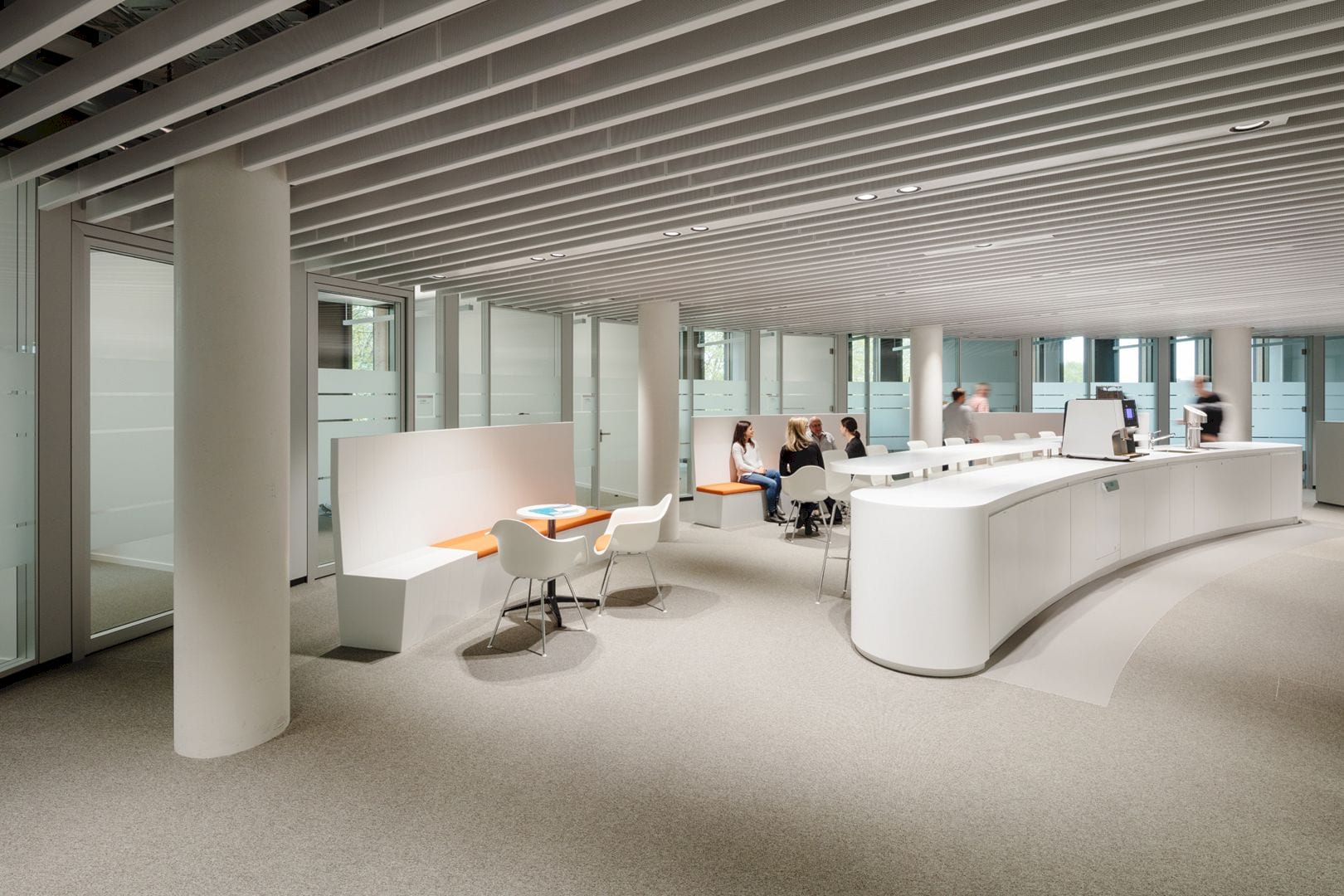 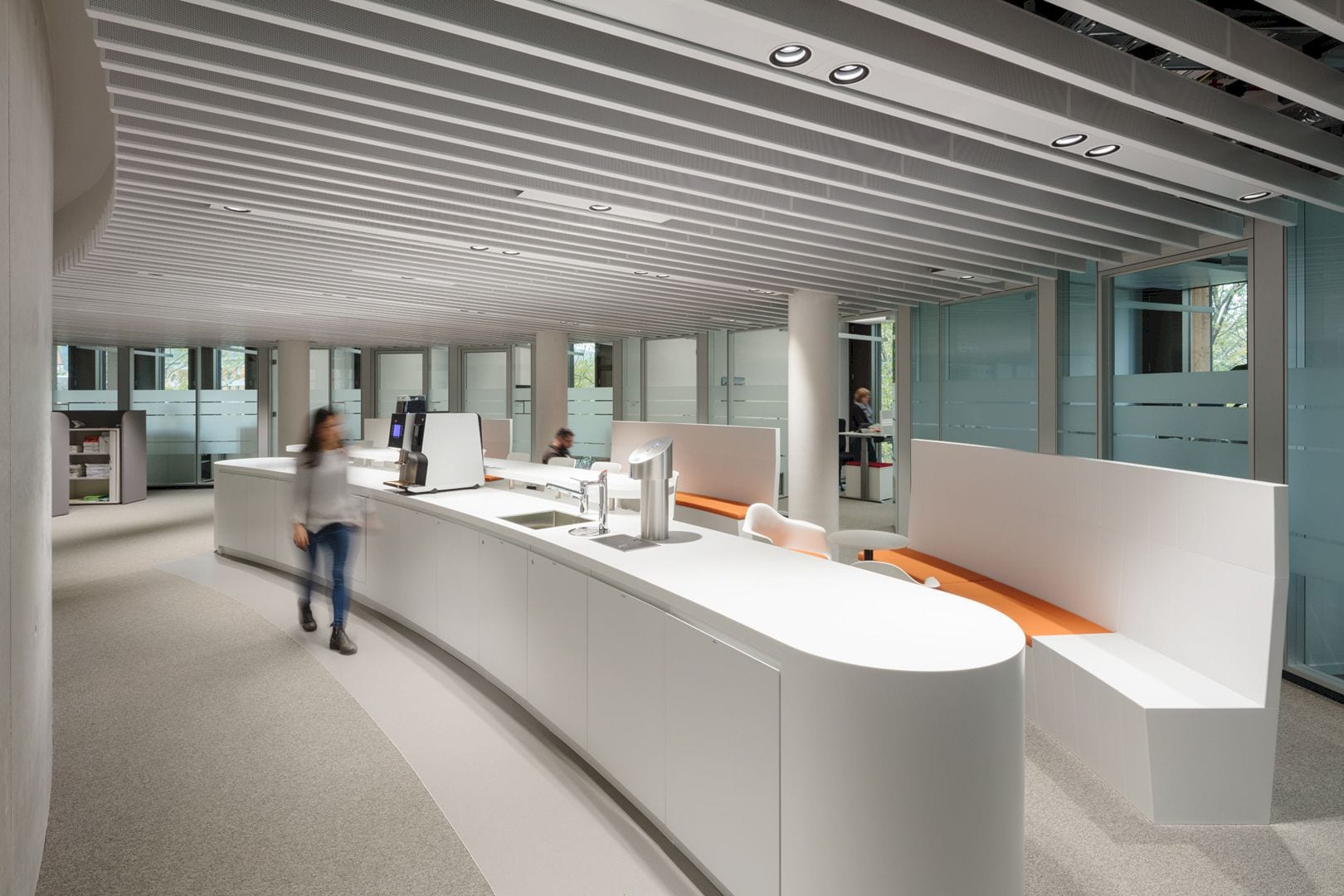 With an administration center and day nursery, this new town hall has been opened in November 2017. It provides workplaces for the 840 employees of the City Administration who has been working at various different locations in Freiburg previously. The second phase is scheduled for completion in 2024 with additional oval buildings have been planned for the city’s administrative functions. 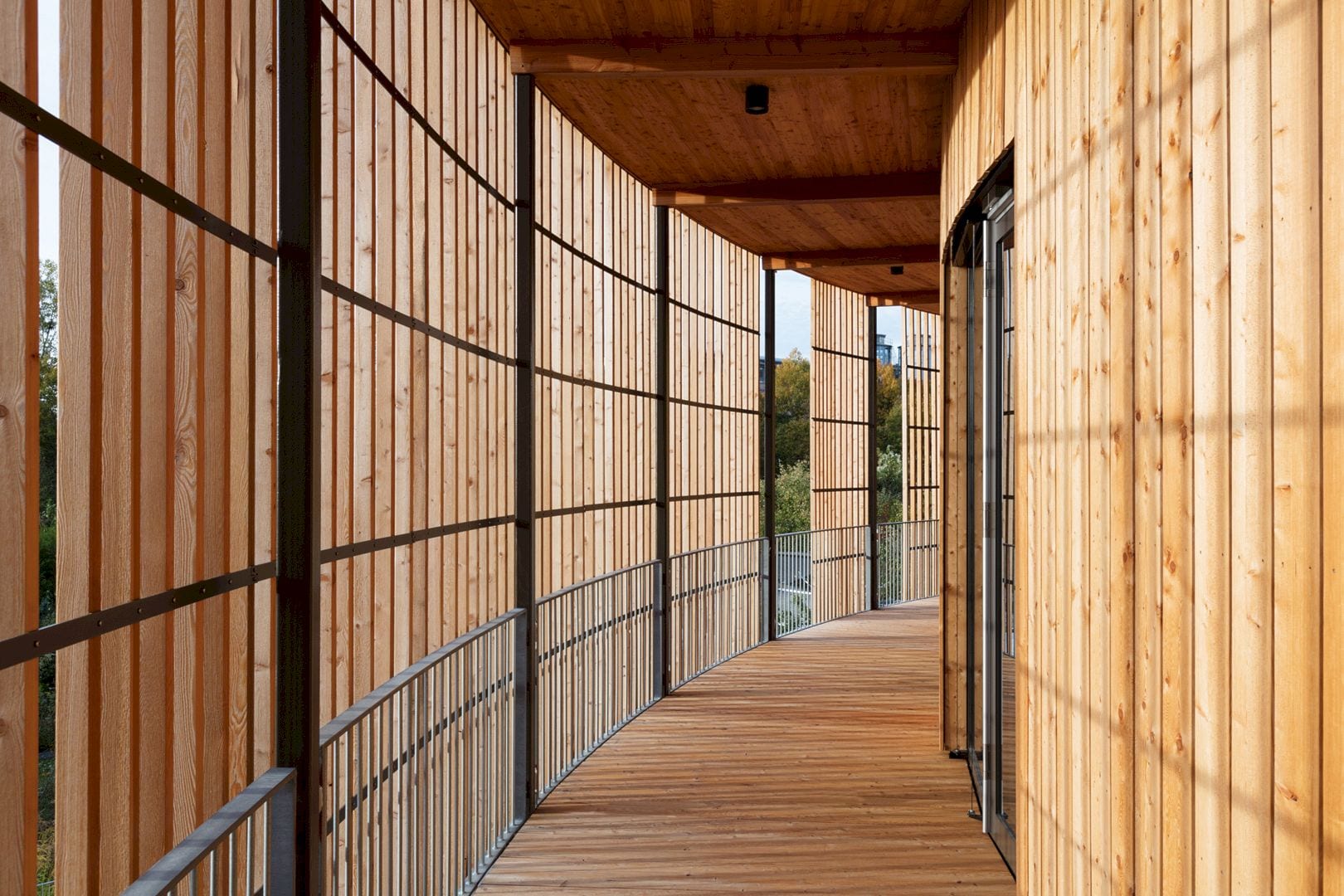 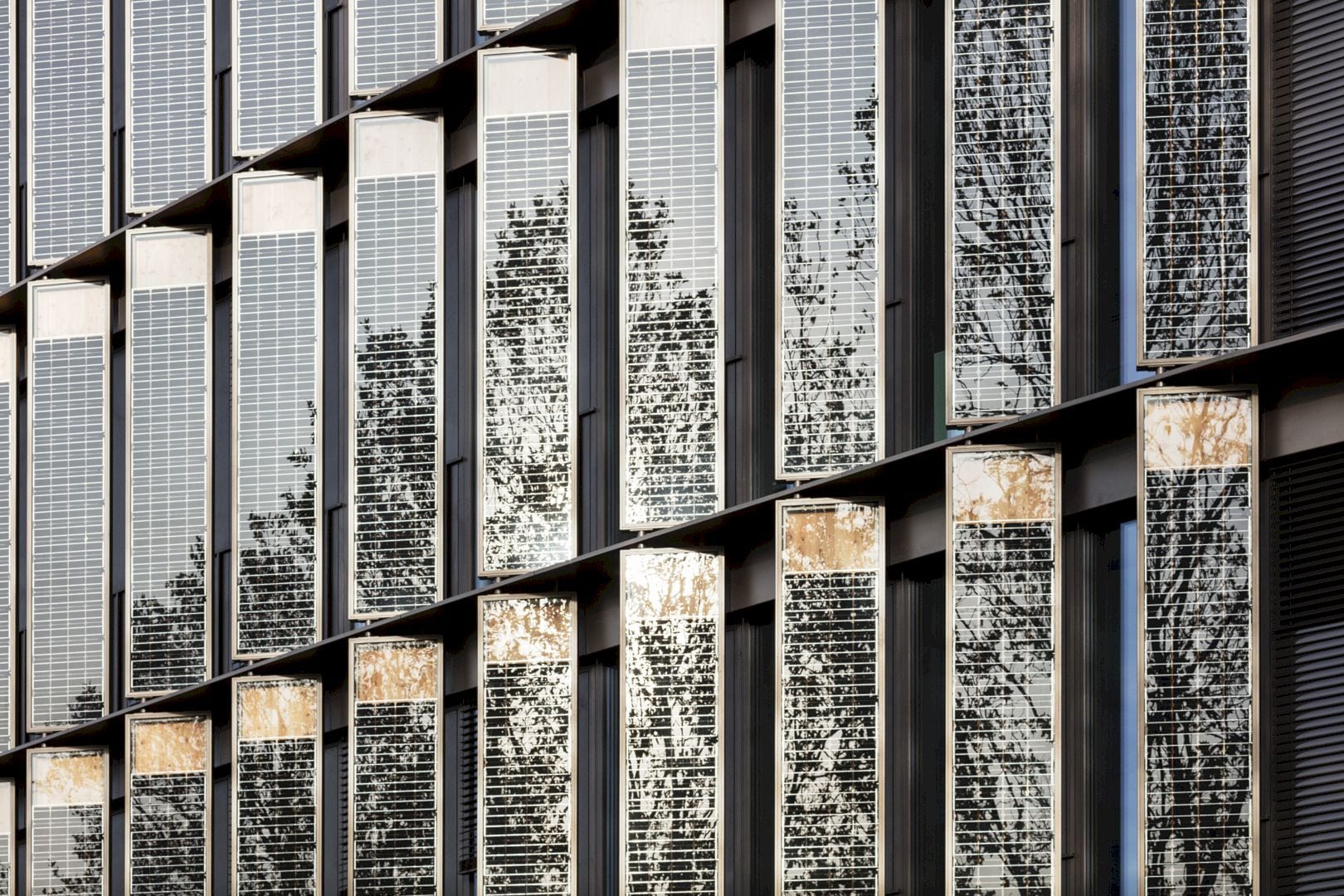 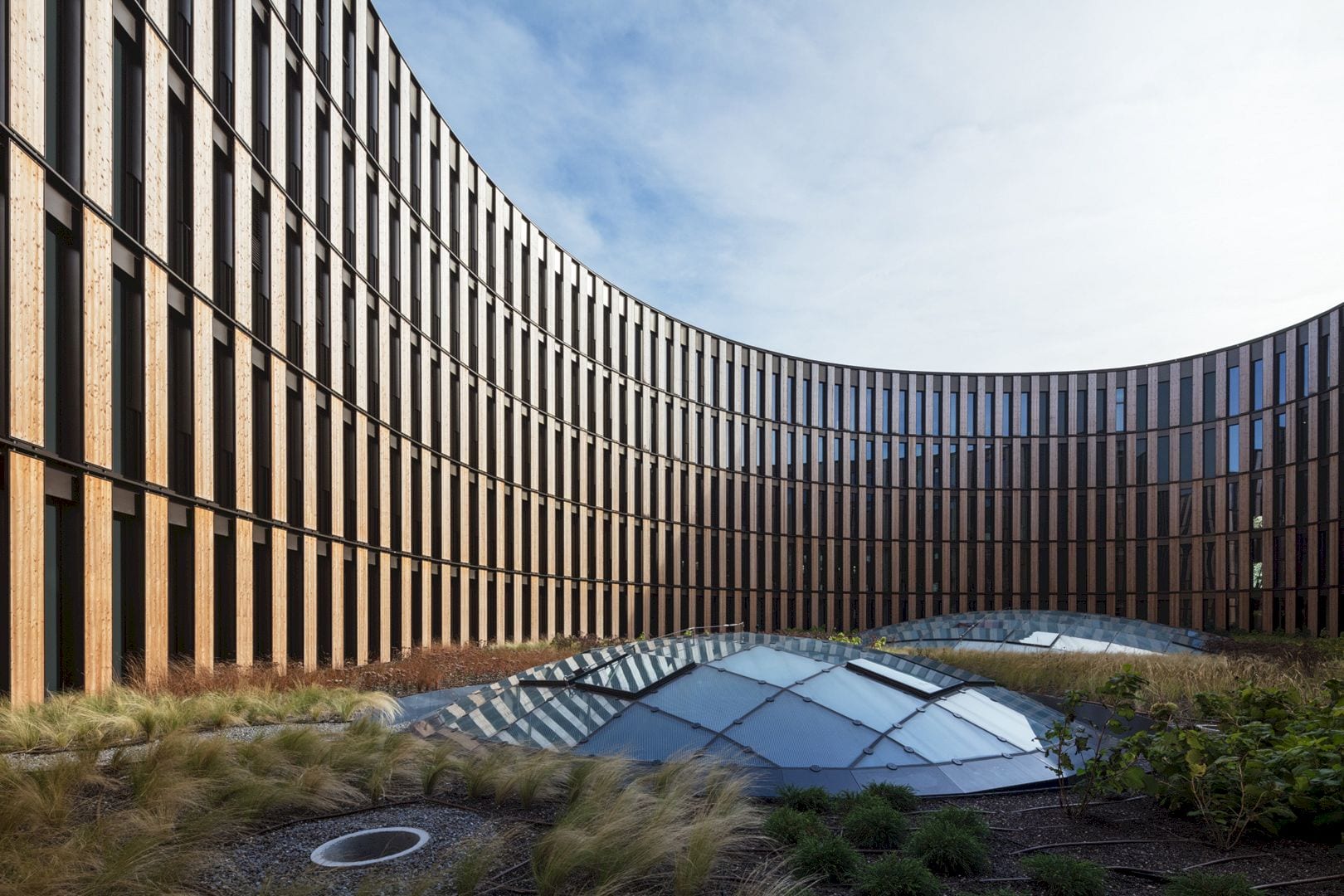 As a part of the town hall extension, the new administration center is designed to provide a stimulus for upgrading the Stühlinger area’s urban design. The scheme of this town hall was the winning entry of a 2013 international architectural competition, characterized by transparency and openness.

“Green campus” is the key element in this project, combining a day nursery and three building tracts. The building ensemble can reinforce internal working with stunning views and routes of the public pedestrian. The main entrance to this new building is situated opposite the existing building while the new ensemble is integrated into the green space between the University Hospital and Eschholz Park. 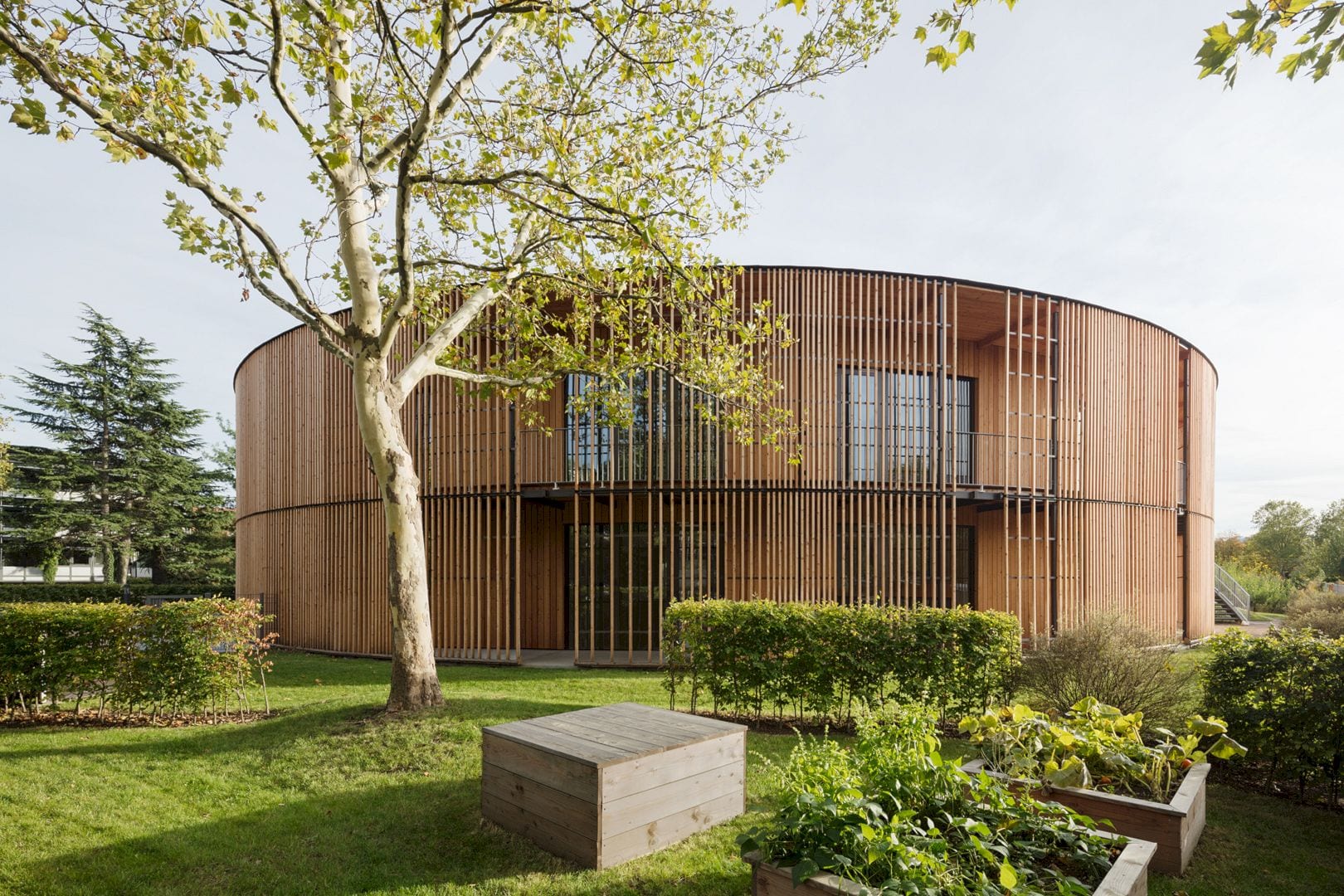 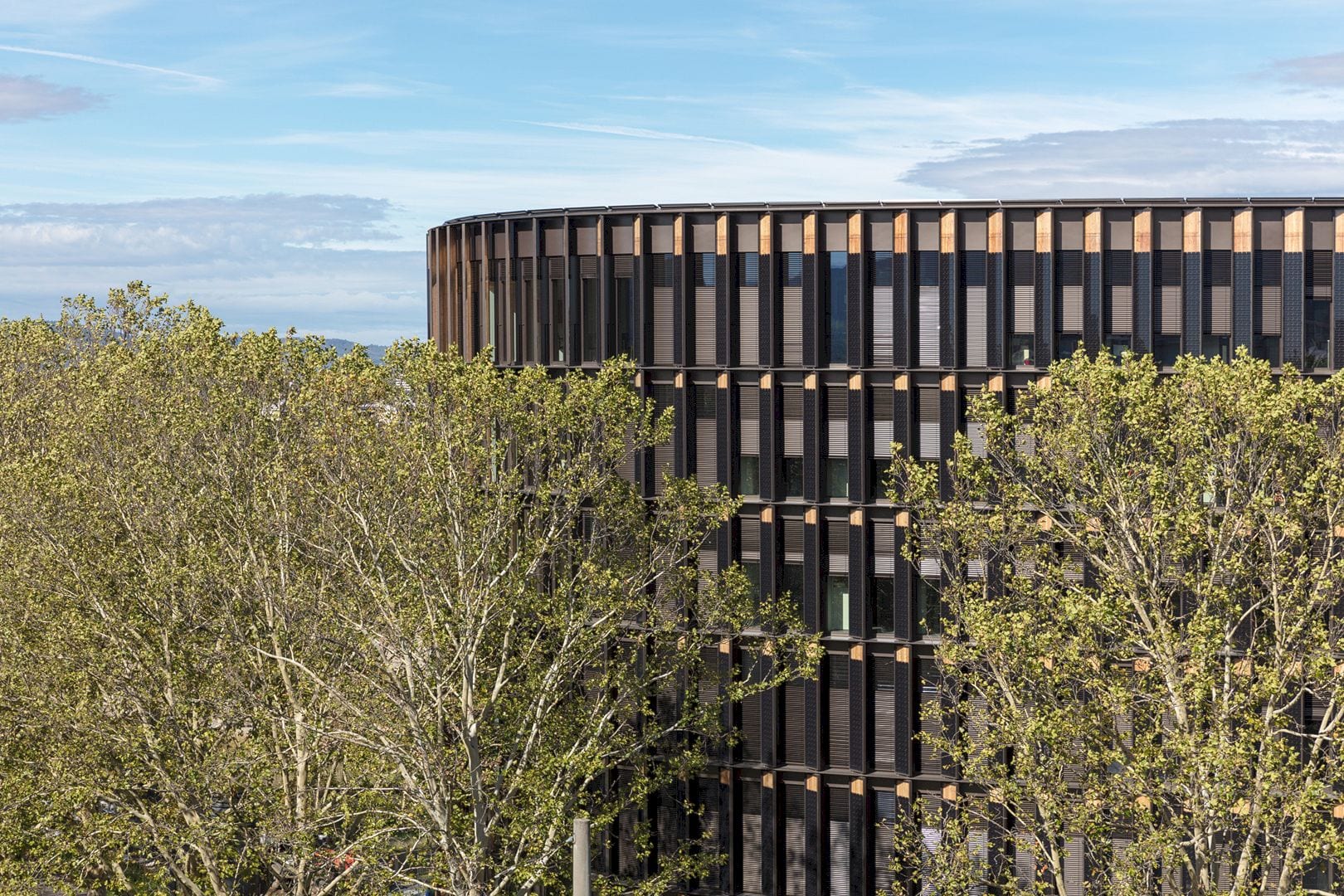 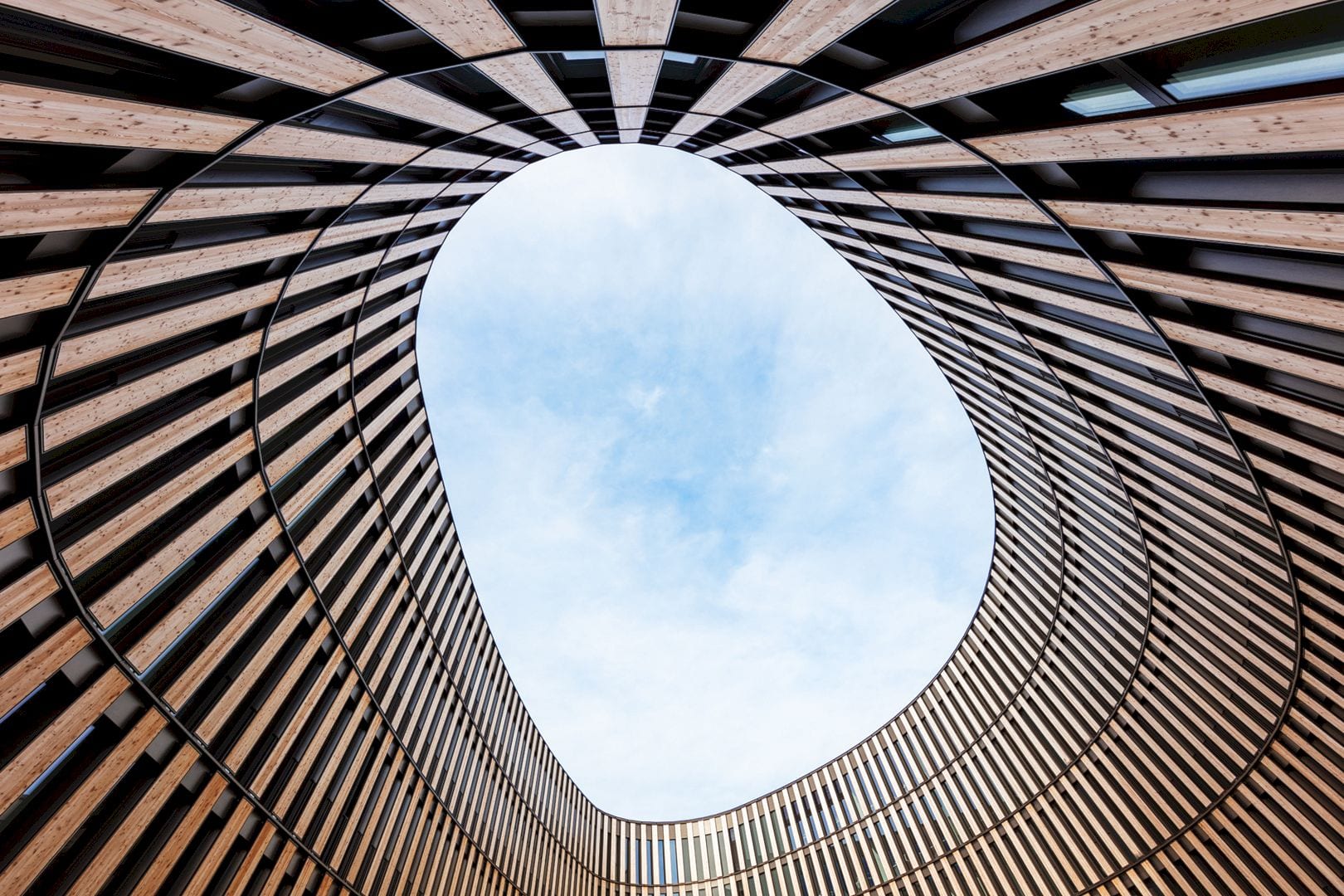 Replacing a town hall pavilion from the 1960s, the heart of the new six-story building is the citizens’ service center on the first floor that has a staff restaurant and also conference rooms. The floors above are used for single and double offices, including team offices with open-plan desk arrangements for the City Administration’s respective departments.

The offices’ plan layout is reversible and flexible thanks to the variable glazed partition wall system. Communication through the building is also promoted by some interaction zones while the routes through the town hall facilitate easy orientation and are designed in a transparent way. 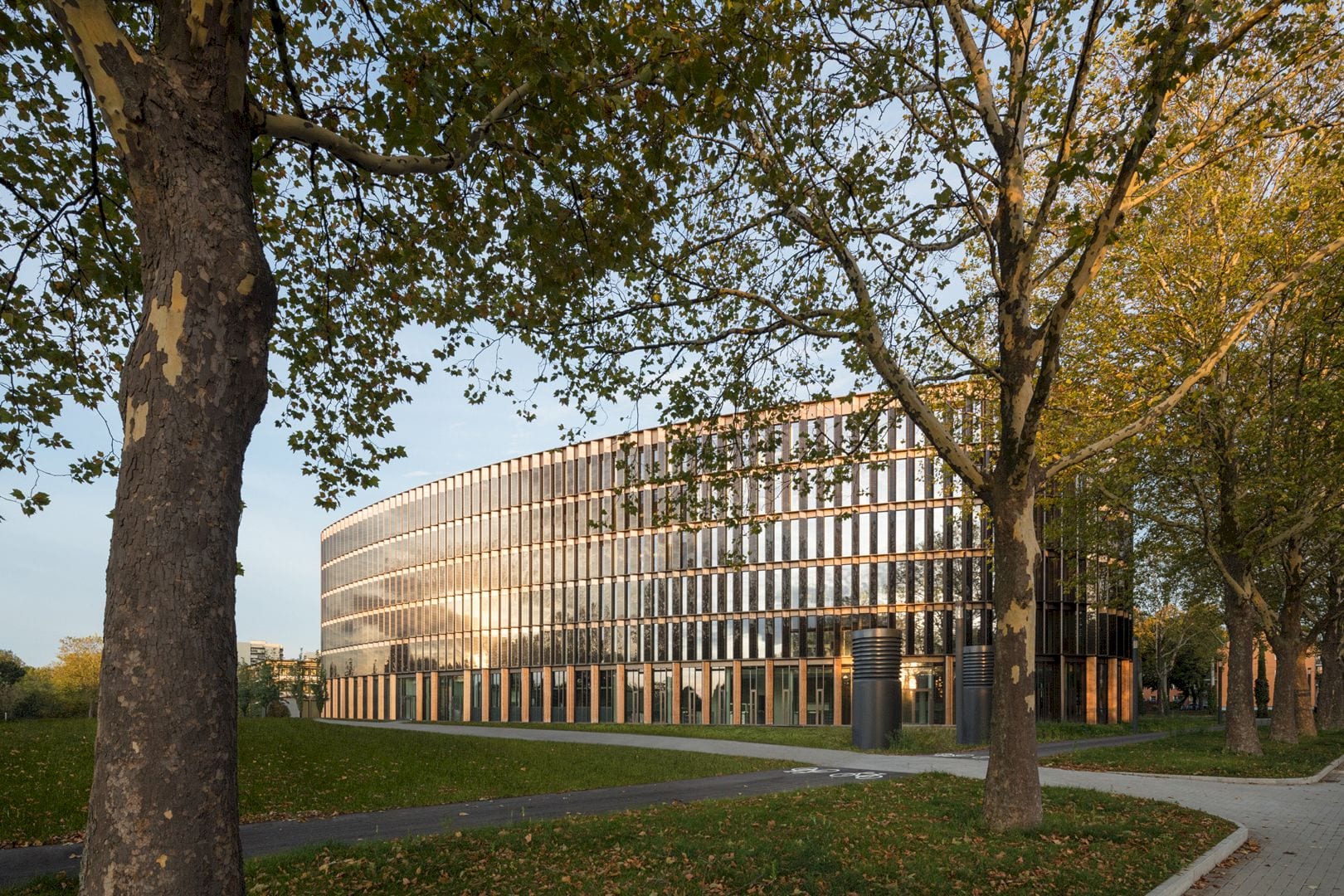 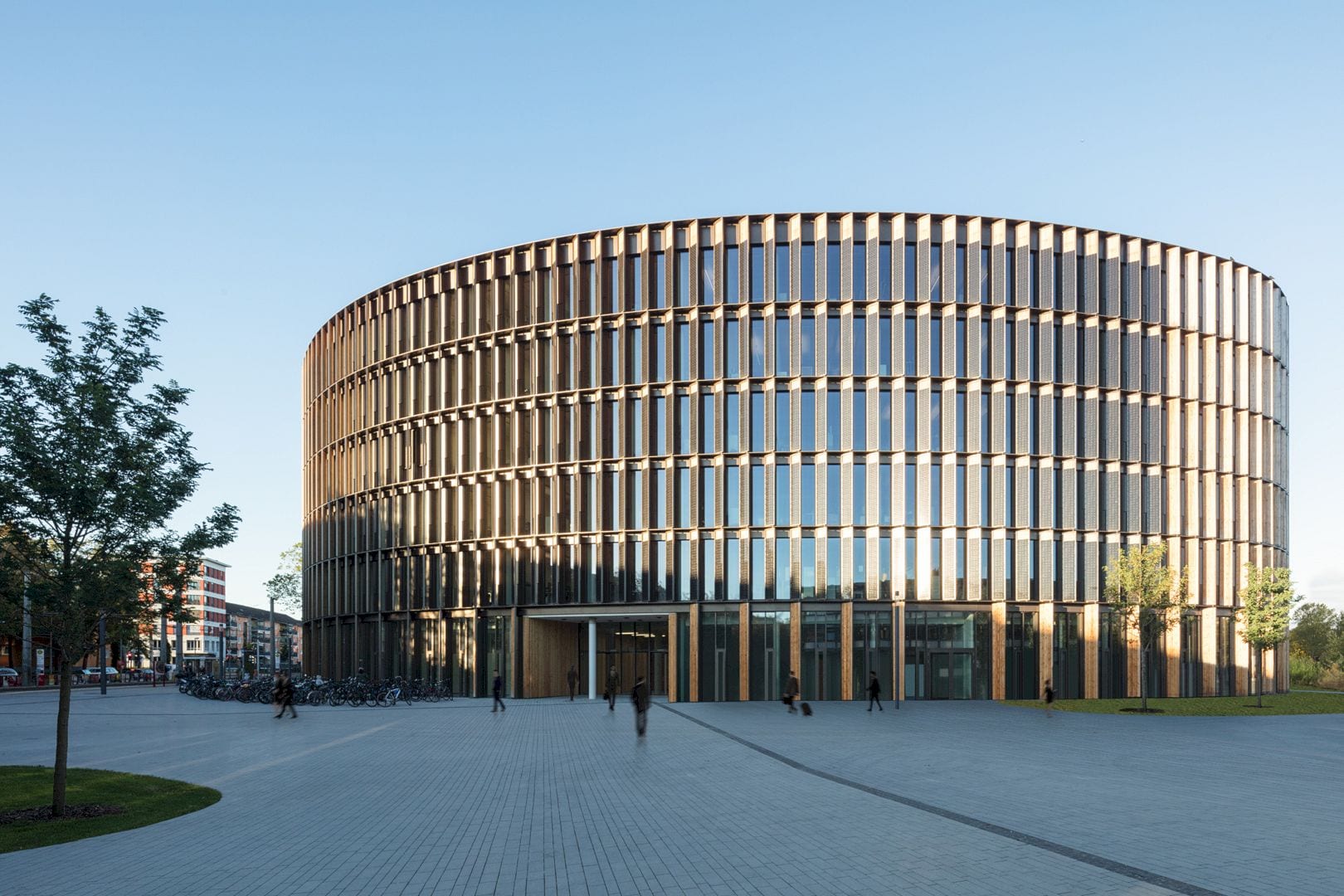 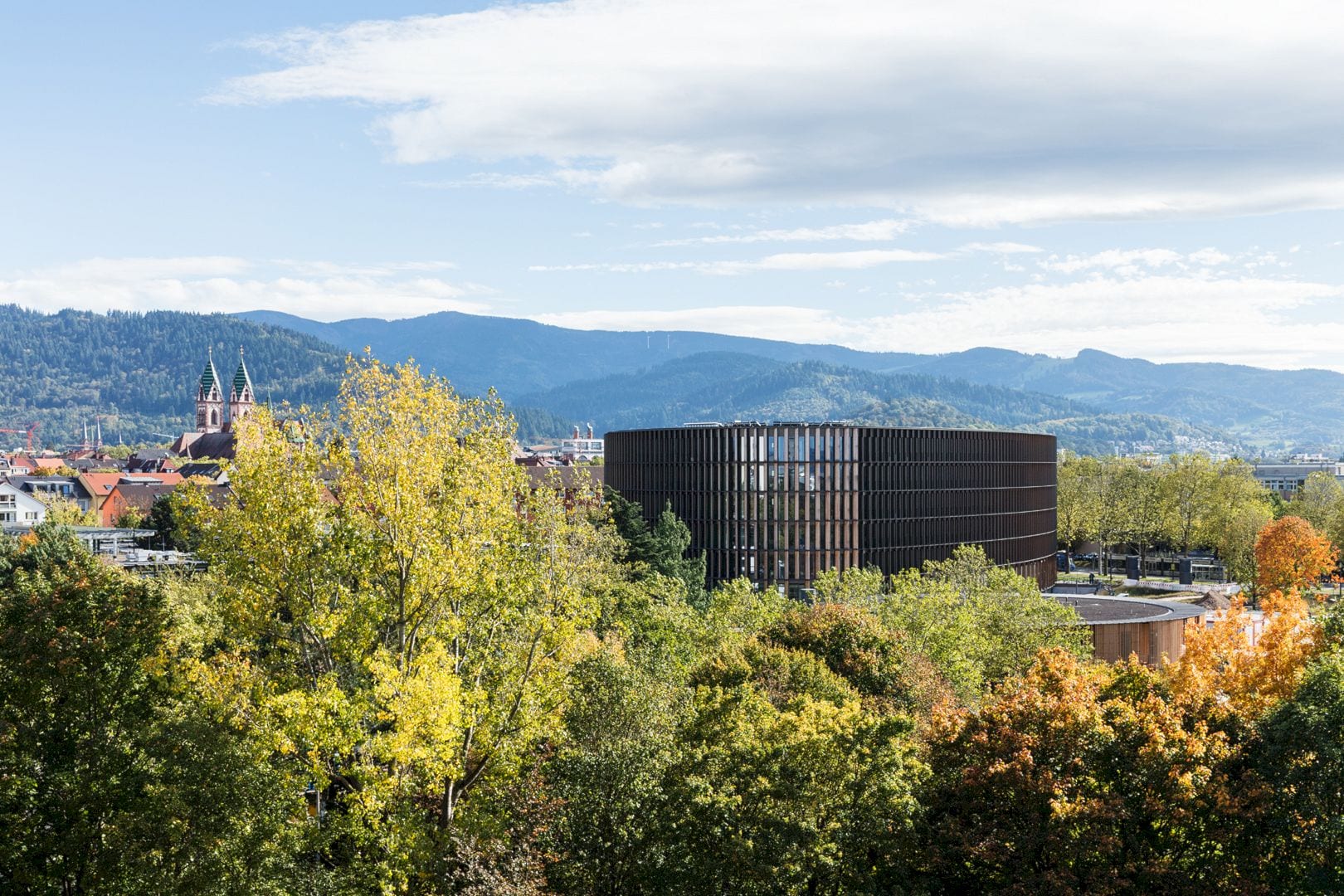 The two buildings are awesome visually with their timber facades of locally sourced larch wood. The town hall’s facade also has been constructed using staggered that projecting modules with high-quality thermal insulation and photovoltaic cells virtually.

The elements of the story-high glazed facade are used to optimize the daylight intake while the circular day nursery building’s facade features large openings with balcony doors, narrow strips of vertical timber cladding, and also an access balcony on the second floor. Daylight and vistas to the outside are provided by the openings that also offer direct access to the building. 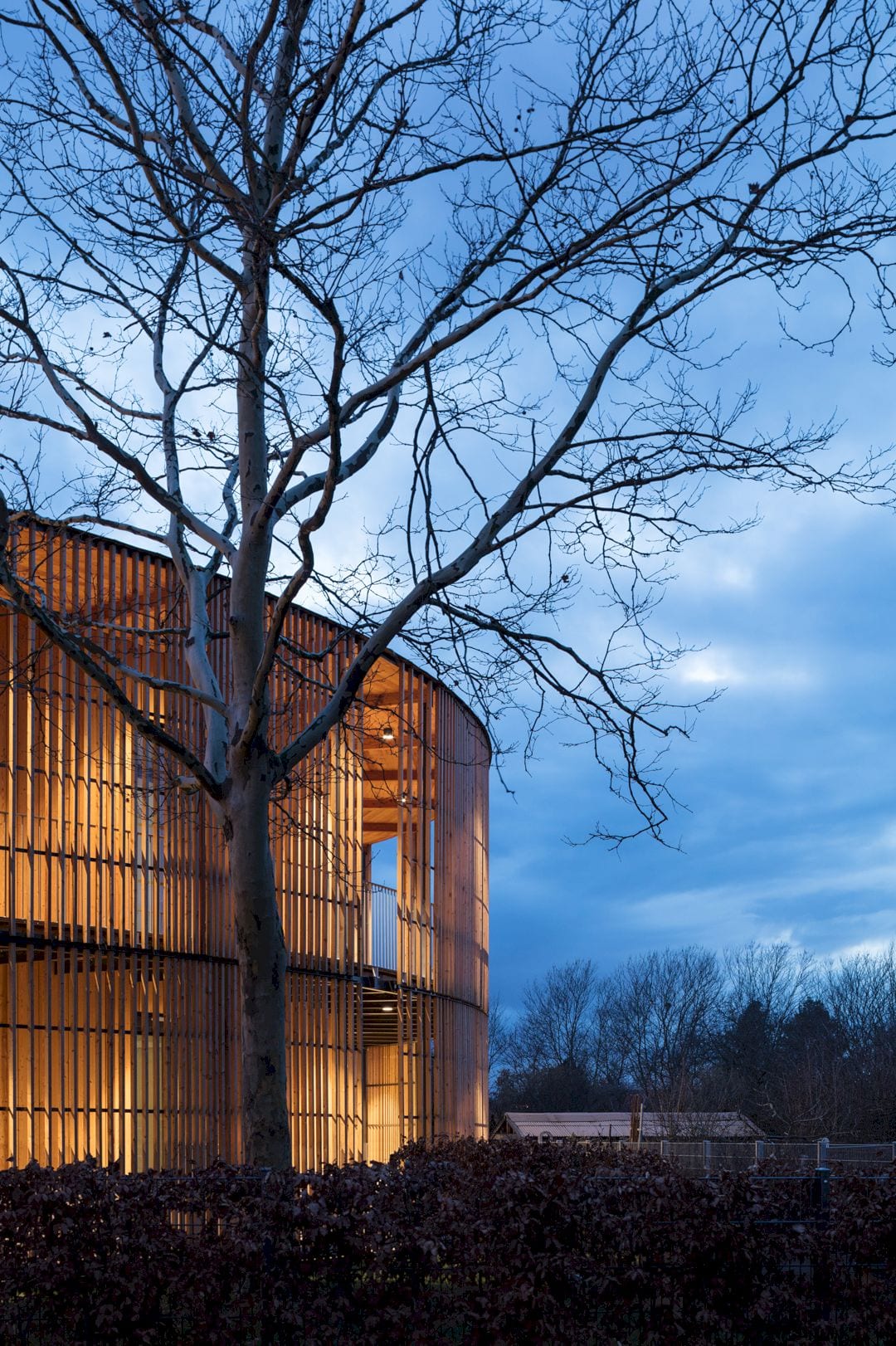 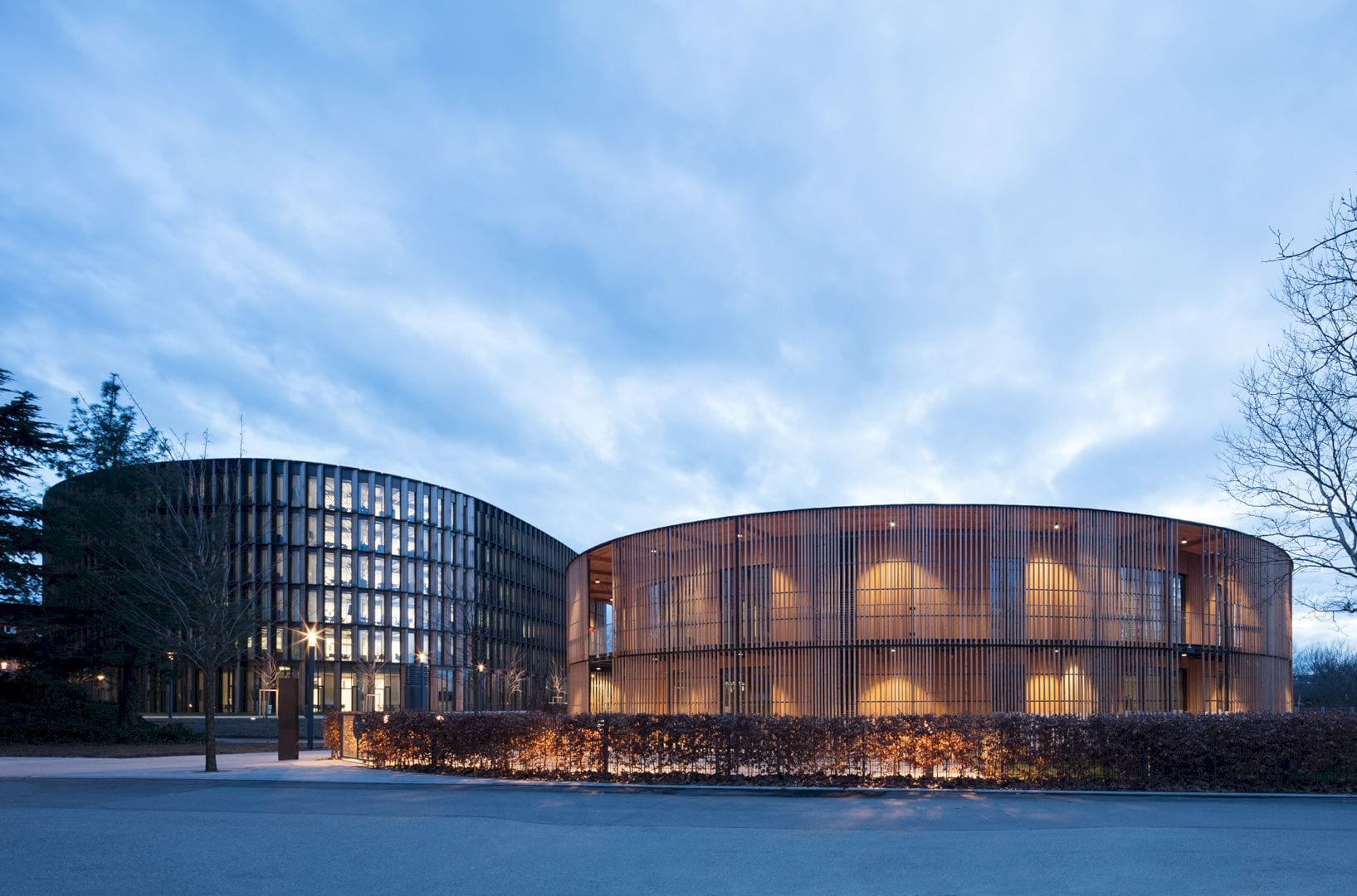 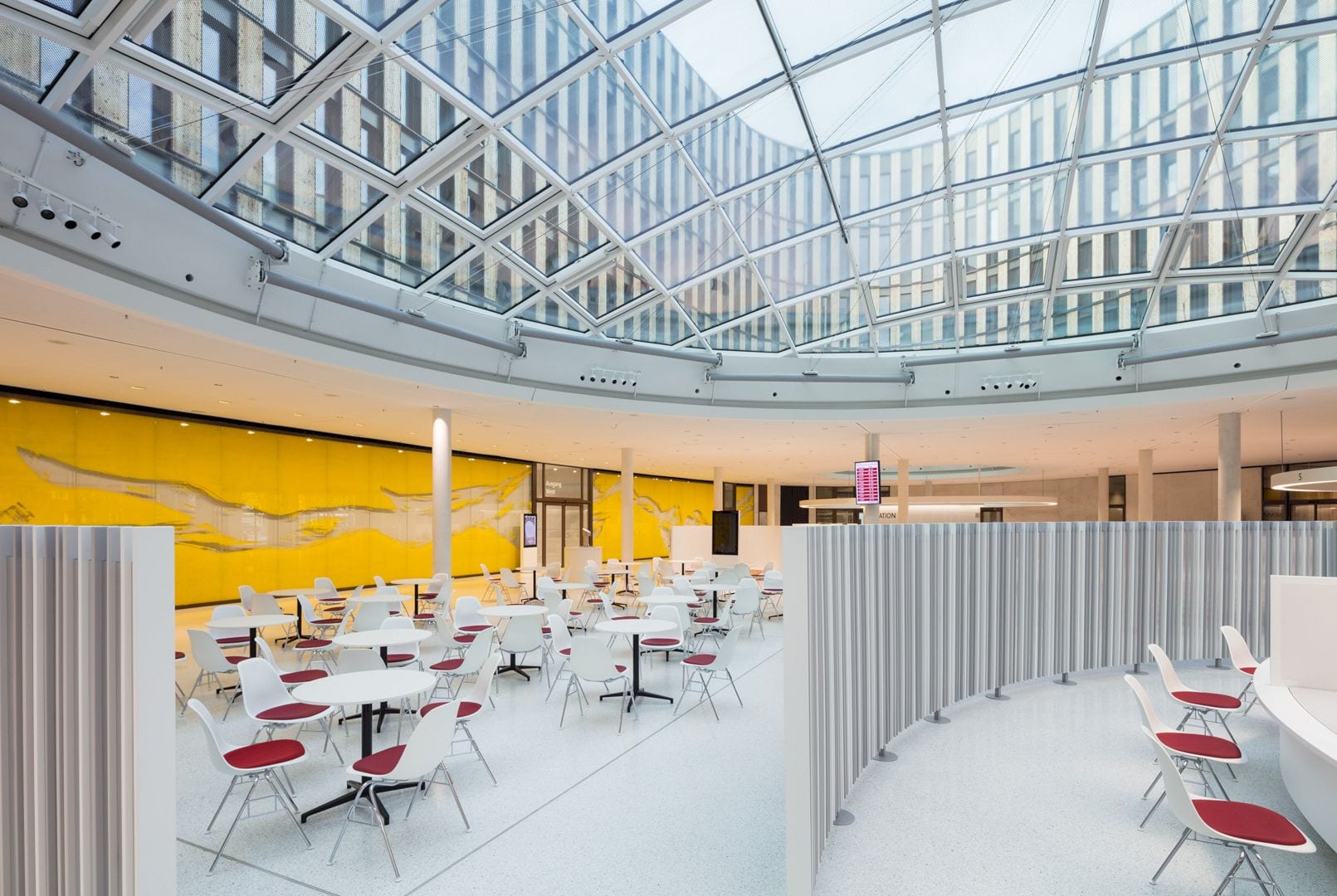 This building generates more energy than it consumes every year and the excess energy is fed into the grid of the city. The primary energy demand for hot water supply, ventilation, cooling, and heating is as low as 55-kilowatt hours per square meter per year. It means that there is only 40 percent of the primary energy demand of comparable modern office buildings.

In order to apply the principle of sustainability to the building, the design of this building relies on straightforward technical solutions. These solutions are also economical to operate. The offices’ room climate concept involves mechanical background ventilation with heat recovery, triple glazing, external solar screening, heating/cooling sails, and thermal mass activation. 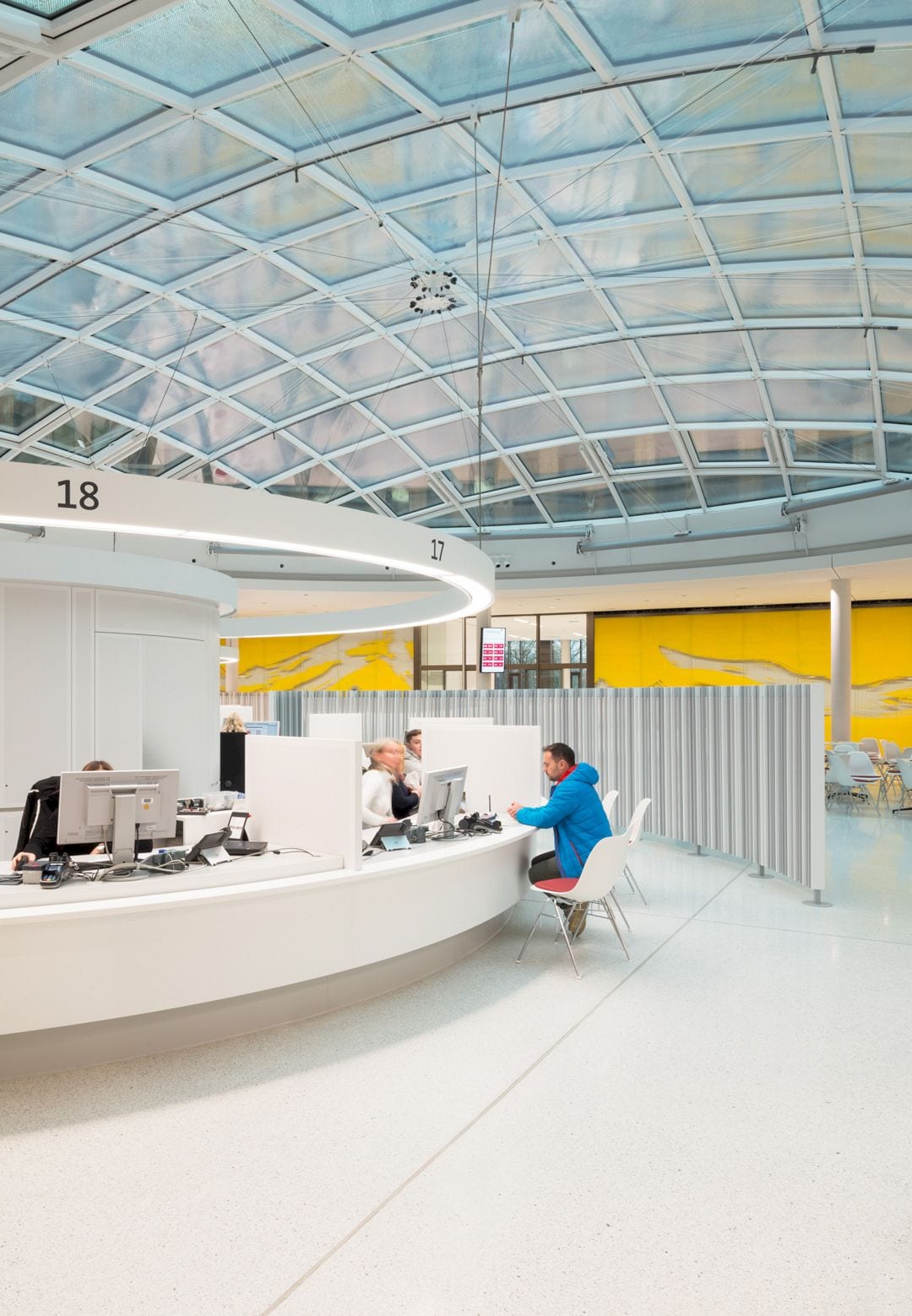 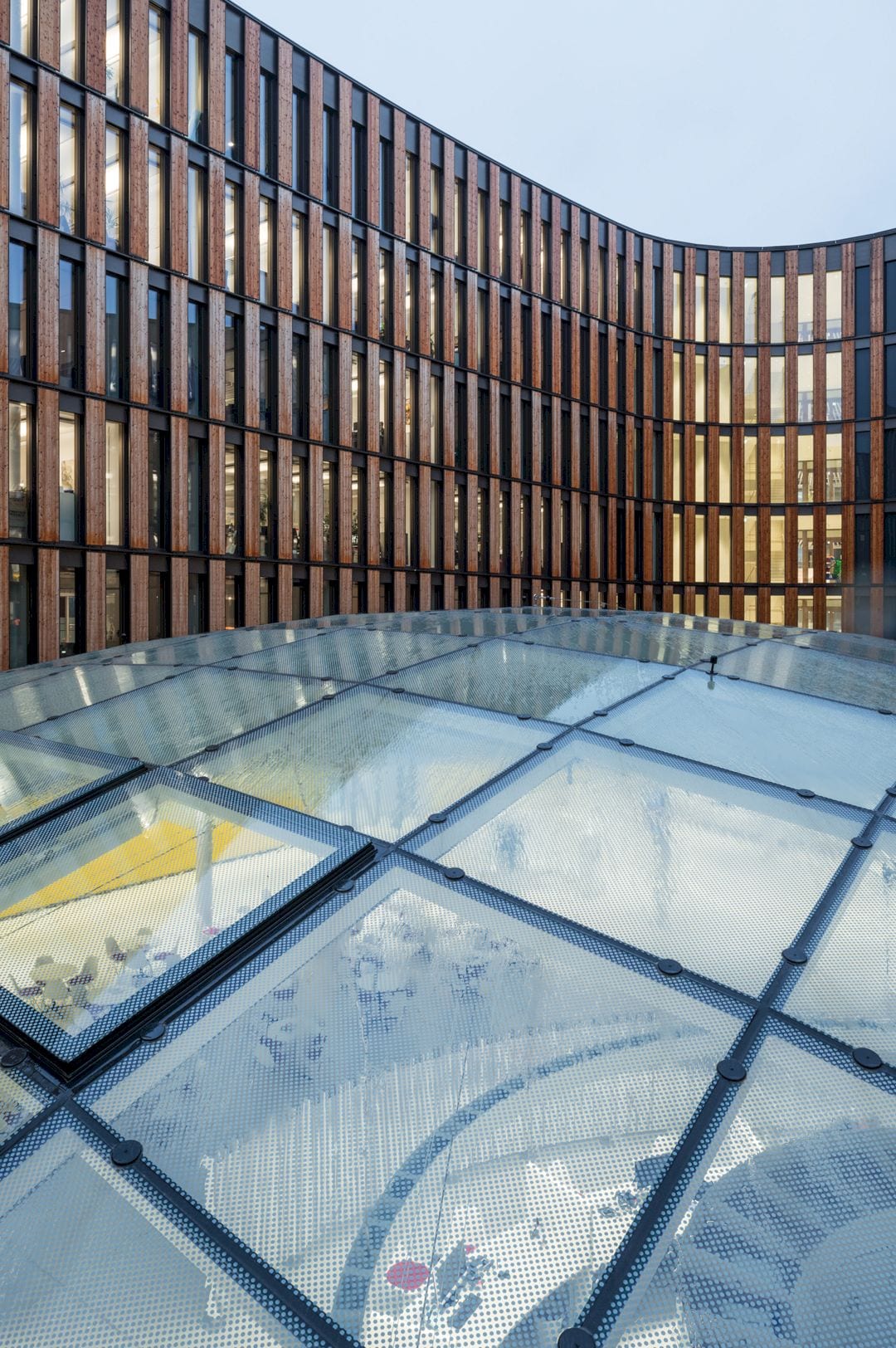 All workspaces and offices in this building have been designed for openness, functionality, and working in a flat hierarchy with good security and privacy. Thanks to its curved design, all spaces can have a generous and flowing flair. Large roof lights offer good vistas to the outside and also provide adequate daylight every day.

Bright materials and surfaces of the building can give an awesome impression of clarity and transparency. There are also some occasional color accents that appear within the red or orange spectrum especially in the design of the furniture.