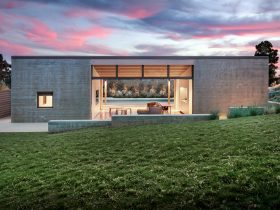 This gardened apartment with an area of 134 sqm is located in Costa Brava, a coastal region in Catalonia in northeastern Spain. The main task for Román Izquierdo Bouldstridge and the team of the interior design is to create a residential space inside the Costa Brava House where nature, wood, and light harmonize in a unique atmosphere.

​In order to meet the needs of the family by doubling the area of ​​the existing first-floor apartment, an underground floor was installed through excavation. Three dry area spaces for mining and ventilation in the basement bedroom were secured first, and then the excavated soil was taken out without difficulty.

An underground space was created with a bearing wall, a retaining wall around the perimeter, and an existing foundation. ​

In addition to the bearing wall, a new partition has also been installed to secure a corridor space across the space from the terrace on the south side and the two dry areas to the staircase.

And all the floors were made of oak, up to the staircase, which serves as a passageway for light coming through the north window to the basement.​

This space, which can also be used as a living room, widens the range of incidence of natural light and promotes ventilation while improving the visual depth of space. In addition to that, due to the effect of soil thermal inertia, energy efficiency to control room temperature in both summer and winter is also improved.

​On the first floor, after breaking down the bearing wall between the dining room and the staircase so that the backyard can be seen from the terrace, columns and beams were installed with H-beams to reinforce it.

It was designed to add depth of space to the interior where the door frame is prominent, and at the same time, the same wooden window serves as a device that connects the exterior garden with the interior space.