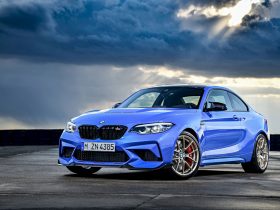 By 2023, 80 percent of all Citroën models in at least one version should use an electric motor – in combination as a hybrid or as the sole drive. PSA is taking a step in this direction with the Citroën C5 Aircross SUV Hybrid.

Citroën uses a 1.6-liter petrol engine with 132 kW (180 hp) in the hybrid. This engine complies with the Euro 6d-Temp emissions standard in the model without an additional E-train but already meets the Euro 6d in the hybrid.

The entire drive is installed transversely at the front, PSA has opted for a P2 arrangement – and not for an electrical secondary axle, via which some manufacturers offer all-wheel drive. The C5 is still only available as a front-wheel drive, which probably does not bother a majority of customers.

The electric motor contributes 80 kW, the system output is 165 kW (224 hp). Citroën currently does not provide any information on mileage, with one exception: the SUV can achieve speeds of up to 135 km / h purely electrically.

The lithium-ion battery has a gross capacity of 13.2 kWh, but how much of it can be used is unfortunately not revealed by PSA. In the WLTP, the C5 Aircross Hybrid is expected to cover up to 50 km, and this statement is still preliminary.

The included charger delivers up to 3.7 kW, the French carmaker provides charging times for lines protected with 8 and 14 amps: seven are mentioned once, with 14 A it should be four hours. Anyone who pays can charge on a 32 A wall box with up to 7.4 kW. Then the tank should be filled after three hours.

With the “ë-Save” function, the driver can charge the battery using the internal combustion engine, choosing between 10, 20, or 100 percent. Citroën guarantees eight years or 160,000 km that the battery capacity will not drop below 70 percent.

The charging speed is displayed in km / h, which is to be taken literally: the instrument cluster shows how many kilometers of the range is available within an hour with the current charging capacity.

A small lamp that is visible from the outside in the housing of the frameless interior mirror signals the purely electrical operation. In the not too distant future, this could be a conceivable condition for a trip to a city that excludes combustion engines.

At 4.5 meters, the SUV is offering plenty of space. The rear seat can be moved so that the trunk volume varies between 460 and 600 liters. The charging cable should be easy to stow under the double loading floor.

The PSA range is similar to the competition in one respect. The hybrid version is well equipped and marks the top performance, but the customer has to dig deep into the pocket for the partial electrician. The basic model of Citroën C5 Aircross SUV Hybrid costs around € 7,000 more at € 40,390 than the comparable C5 petrol engine with 180 hp.