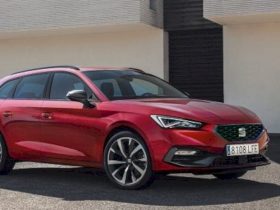 The new SEAT LEON Sportstourer: Born in the sun.

Citroën, one of the largest automotive manufacturers from France recently celebrated its 100th anniversary. Established since 1919, Citroën has grown rapidly and is one of the giants of the French automotive industry. In order to celebrate the anniversary, Citroën issued a very unique and innovative concept car.

This concept car is called “the 19_19” because it is motivated by Citroën’s birth year of 1919 and the year the concept car was released in 2019. The 19_19 was inspired by the Wankel-powered Citroën RE-2 helicopter in the 70s. The shape was made very similar to adopting a similar round glass cabin.

The exterior design is still limited to the concept or prototype. So there is still a possibility that this design can change slightly or even thoroughly.

Uniquely, because of its rather eccentric shape or exterior design, Citroen also described this concept as “a true UFO in the automotive sector,” which might be rather appropriate because it was inspired by the world of aviation and interior design, and had an overall efficient exterior design.

Basically, the 19_19 concept by Citroen is an SUV with a 30-inch wheel height and is powered by 100Kwh of battery power that produces electrical energy with 456bhp and 800nm ​​of torque that can move from 0-62mph in five seconds.

As for the all-electric range mentioned earlier, which is 800 km (497 miles), the owner can recover 600 km in just 20 minutes thanks to the fast charging technology. 19_19 is equipped with an induction charging system, which allows the battery to charge directly while traveling where road infrastructure allows.

The interior design of The 19_19 is also made very comfortable like a lounge equipped with chairs covered in soft material and shaped like a lounge chair, not like a car seat in general.

Citroen designed the 19_19 cabin to feel like an extension of the passenger house, with each seat offering a different experience and the convenience of different postures according to the user’s wishes.

Passengers also get extraordinary access to the cabin thanks to the rear-hinged autoclave door, while the atmosphere inside is reinforced by deep and warm colors, with a blue and red base, similar to Ami One Concept.

The France-based company didn’t release a lot of information about the release date or even the probabilities of 19_19 getting on the production line. For now, the concept is still too far for implementation, but hey, never say never!