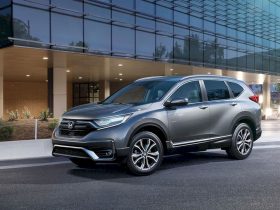 All-New Honda CR-V Hybrid: The Best-Selling Crossover Over the Past Decade

Citroën is another carmaker that jumps to the hype train of electric cars. The company releases the Citroën C-Zero that is a purely electric, five-door car from the PSA group that belongs to the micro-car segment.

Like some other models of the brand, the C-Zero comes from the cooperation of the French carmaker with Mitsubishi. The former Mitsubishi i-MiEV (now Mitsubishi Electric Vehicle) provides the technical basis for the Citroën C-Zero and its corporate brother Peugeot iOn.

The Citroën C-Zero runs with a 67 hp electric motor, which is powered by a lithium-ion battery with a capacity of 14.5 kWh. Citroën grants a warranty of 100,000 kilometers or eight years on the battery.

While the C-Zero initially had a maximum torque of 180 Newton meters, the draft has increased to 196 Newton meters since the 2013 model. The rear-wheel-drive mini-car reached the speed of100 km/h mark in just under 16 seconds and reached a top speed of 130 km / h.

The C-Zero can accommodate four people, but only has a trunk volume of 166 liters when fully occupied. If the rear seat bench is folded, the payload increases to at least 400 liters (measured up to the bottom edge of the window) up to 800 liters with full use of space up to the roof.

The processing inside is neat, but according to some review, the interior seems cheap due to the hard plastic. One thing for sure is that the Citroën C-Zero offers enough space for four people and can score well with its suitability for everyday use.

On the distance, the car is not quite on par with others as the range can hardly reach more than 110 kilometers. In any case, despite the rear-wheel drive, the C-Zero is anything but a driving machine.

The C-Zero does not offer many options for individualization. The prospective buyer can only choose between six color options but is very well served in the standard equipment.

The prices for the Citroën C-Zero start at 21,800 euros. On one hand, it is a lot of money for a small car, but on the other hand, it significantly less than the approximately 35,000 euros that Citroën asked for in 2010 when the model was first launched.